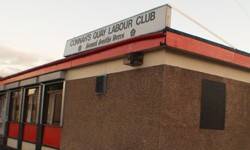 In 1967 visits were made to Liverpool to see Club equipment and also to see Oswestry Labour Club.

The club officially opened on Friday 29 March 1968 by the Rt. Hon. Anthony Greenwood M.P. (Minister of Housing & Local Government). There is a bronze plaque commemorating the event in the function room.

Despite the economic downturn and the sad news that other clubs across the country are closing such as Shotton's Carlton Club and even the Labour Club in Trimdon which was ex-Prime Minister Tony Blair's local Club, the future of the Connah's Quay Labour Club looks bright. New seating has appeared in both the bar side and the function room as well a new heating system installed. The Club has also been re-branded as the Connah's Quay Labour and Community Club to attract to a wider range of the public of Connah's Quay. Regular events at the Club such as karaoke nights are well attended.