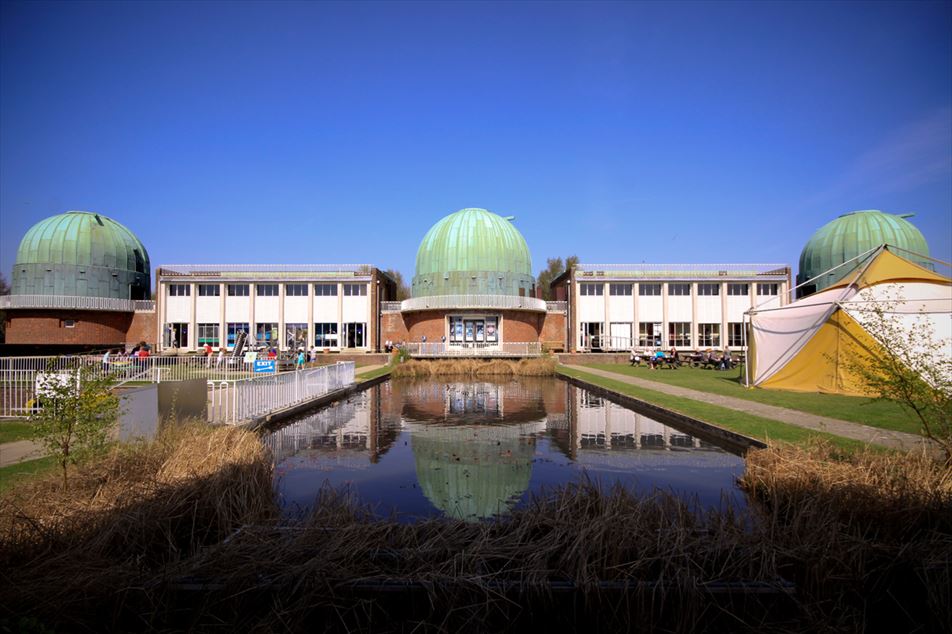 Hands-on Science Centre housed in former home of The Royal Greenwich Observatory.
Special events throughout the year. Phone for details, open Feb to Nov and weekends in Jan/Dec
The building was constructed in the 1950's, and was built to house three reflecting and three refracting telescopes in the six green domes. It is known as the ‘Equatorial Group' after the way the telescopes are mounted. The architect was Brian O'Rorke and the work was completed in 1958. With its unique arrangement of domes around a central bastion the Equatorial Group was one of the most important government commissioned building projects of its period. The domes were clad in copper sheet and coated with a chemical that has helped them to weather to today's distinctive green - one of the features that was intended to make the buildings blend into the Sussex countryside. Modern observatories now have domes painted white or silver to reflect away any daytime heat. The base of the domes were faced with wood-burnt West Sussex brick. The balconies and window surrounds finished in Portland stone; the terrace paved in Yorkstone with Portland stone steps and edgings. The external walls were clad in knapped flint - a traditional Sussex finish, which was a further attempt by the architect to help the buildings ‘blend in'. The buildings were finished to the highest standards and at considerable cost. However, astronomers found the layout inconvenient and even hazardous. Look around the site - at the various levels and walkways, and imagine this in the dark with few of the current railings in place. There are tales of the occasional stumble into the lily pond .