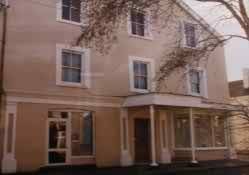 Whitland town hall is a registered charity(504650)conveniently situated near Whitland railway station, close to the A40 and with ample parking facilities. It is suitable for conferences and meetings as it has a large main hall and other smaller spaces for hire per hour. It has IT, printing and copying facilities for conferences, meetings and video conferencing.

The Hall was built in 1904. The ground floor was at some point let to a co-operative society and then a butcher, and in 1950 the top floor became a cinema, The Coloseum, and the rest of the building a staff and social club. In 1973 the Hall was passed to the people of Whitland, and in 1992 extension and extensive renovation was carried out, leading to the Hall that is seen today.

The hall is ideal for holding Receptions, Parties, Dinners, Conferences and Exhibitions.

This a long groundfloor room equipped with tables and chairs as well as a easy chairs. Adjacent kitchen and toilets.

Office with desk and photocopier.

A long downstairs room. Equipped with a long table.