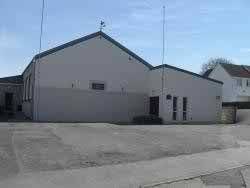 LLANGAIN & DISTRICT MEMORIAL HALL was built in 1963 at a cost of £7,000 on land donated by Mr Tom Roberts of Penycoed (Farm). The architect was Berwyn Thomas & Partners of Cardiff and the builder was D.Geo Lewis & Son of Priory Street, Carmarthen.

The hall was officially opened on Friday, 3 April, 1964. The unveiling of the memorial plaque containing the names of those who died in both World Wars was performed by Mrs May Davies, sister to Lce-Cpl Willie Davies of Green Castle who died of wounds received 23 March,1918, aged 20.

The building was recently extended and refurbished to include access for the disabled thanks to a grant from the National Lotteries Charity Board and other benefactors. In addition the Hall has a sound system grant-aided by NLCB. An extension has been built to store equipment for the Llangain Youth Club, and a new stage lighting system has been installed, thanks to grant assistance from Carmarthenshire County Council and the Arts Council of Wales respectively.