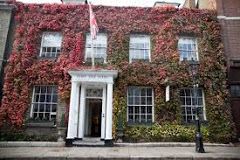 Javed was born and raised in London. After a career in the Financial Services sector in the City, in 2004 he moved to Rye to pursue his ambition of starting his own business. The doors re-opened in the spring of 2005, and one of the things he has realised is that with a 450-year old landmark building, the repairs and renovations never stop! You are very likely to meet him as he also lives on-site, manages the day-to-day running of the business, serves breakfast and sometimes even cooks!

Judith is Javed's partner in all this. They met in 2010 and were engaged just over a year later. With luck they should marry before either one of them retires :)

She is a Royal Academy-trained Opera Singer. These days she spends more time teaching locally and in a Performing Arts College in London. In-between times she is also a voice-coach and has her own company, Opera-Interactive. And when she's not busy with that, or her two children, she will be found helping Javed in the White Vine.

Tony is the other member of the team, having known Javed for nearly three decades. A builder by trade, he's been responsible for most of the work on the building and keeps everything ship-shape. Portuguese by birth, he also speaks Spanish and Italian. Being a very keen cook, he also cooks all the breakfasts. We don't call him 'Super-Tony' for nothing!

Together, we three are here to ensure your stay with us is all that it should be and hopefully more. When you visit, you're also visiting us and our home so a warm welcome always awaits.