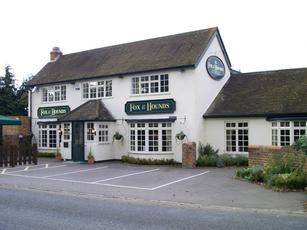 We are just south of the village of Theale, opposite Hosehill Lake. The Fox & Hounds is believed to be around 200 years old and was originally a drinking venue for local farmers back in the early 1800's, it was known then as the Drum & Monkey. The village of Theale has had the nickname of 'The Ale' due to fact of having 13 public houses on the high street alone crammed between many family run businesses.