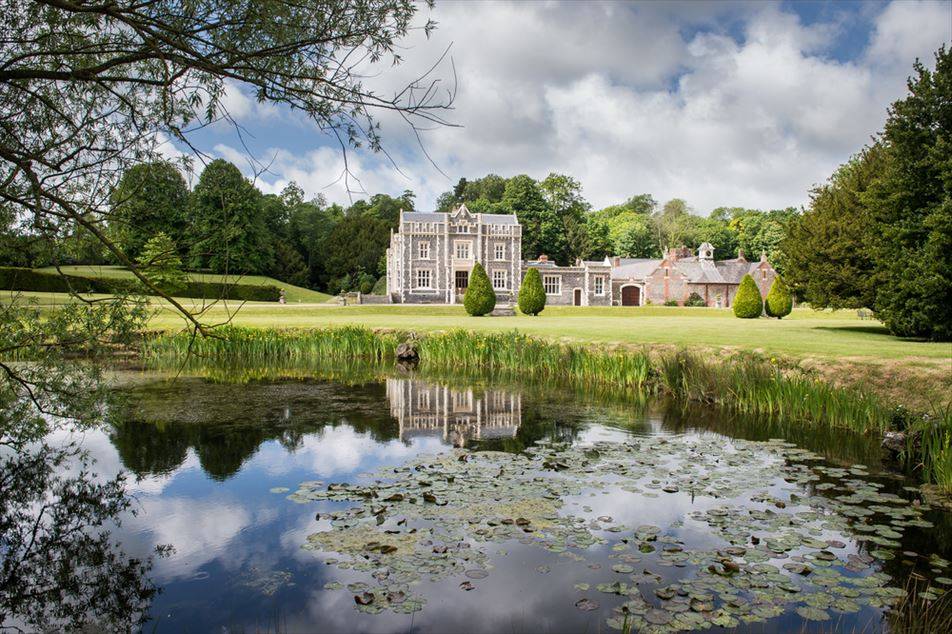 Folkington Manor - Photo of the Grounds

The quiet lane to Folkington leads to a Grade 1 Listed church dedicated to St Peter, and onto the South Downs.

Folkington Manor was built in 1843 by the architect William John Donthorn (1799-1859), near the site of a manor that was recorded in the Domesday Book in 1086. In the 1240s, that house had passed on the marriage of the heiress Olympia de Folkington with Sir John de la Warre, Sheriff of Herefordshire, in whose family it descended until purchased by Sir Richard Sackville, known as Fill-Sack on account of his prodigious wealth, in 1543.

Eight years later, the bankruptcy of his great-grandson, the Second Earl of Dorset, brought about a forced sale for £2300 to a London merchant. The Place, as it was formerly called, was held on a long lease by the Culpeper family. In 1652, just after the lease expired, Folkington was purchased by Sir William Thomas, and was one of only three houses in Sussex to be depicted in the fashionable Britannia Illustrata of 1707, the year after it had been inherited by William Dobell.

The old house was largely demolished in about 1820. In 1840 Folkington, together with the manor house at nearby Wootton, were bought by Thomas Sheppard, M.P. for Frome, who three years later built the present manor at a new site slightly to the north of the church. Folkington Place, the remnants of the original building on the manorial site, retains some architectural elements of the ancient home of the Sackvilles, Culpeppers, Thomases and Dobells.

After the death of Thomas Sheppard’s son in 1875 both properties were sold to Mr James Gwynne, an engineer and antiquary, and in 1915 passed to his son Col. Rupert Gwynne, M.P. for Eastbourne between 1910 and 1924. Rupert Gwynne was father of Elizabeth David, the pre-eminent British cookery writer of the mid-20th century, and brother of Violet Gordon Woodhouse, the influential and highly acclaimed musician. On his death the house passed into the hands of his younger brother Sir Roland Gwynne, Mayor of Eastbourne 1928-31.
As noted in a Country Life editorial in 1958, Folkington has long had a close connection with the arts, a tradition that continues to this day.

Ronald Stacy-Marks purchased the house and relatively a few acres in 1968. An initial restoration was undertaken after the property had been empty for five years.

The Flint Rooms were at the core of the families well-respected fine-art business with the Manor containing a number of galleries suitable for displaying large amounts of fine art. Adam Stacy-Marks took over the family business in 1987 increasing and completing the current estate.

Folkington Manor (pronounced Fo’ington) is a beautiful, privately-owed grade II* listed English country home set in 85 acres of glorious parkland nestled in the heart of the South Downs National Park between Lewes and Eastbourne. This stunning venue has a very romantic history and is ideal for weddings.

Licensed for civil ceremonies and receptions in a stunning location, Folkington Manor will make an elegant, picturesque backdrop to the special day. Just as each couple is completely unique, Folkington provides a personal, bespoke service to ensure that each wedding is individually tailored. From initial enquiry through to the wedding day, Folkington works with you to develop your ideas, within your budget, so that your wedding is simply perfect.

The space at Folkington is very flexible. Ceremonies can be held in the beautiful Flint Halls which are licensed for civil marriages, partnership ceremonies and renewals of vows. Drinks receptions and wedding breakfasts can either be held inside the Flint Halls or in a marquee in the grounds. We encourage you to come and see the options available.

THE CEREMONY IN THE FLINT HALLS:

With beautiful curved beams, striking architecture and a wealth of natural light, the two historic Flint Halls are attractive flexible spaces that can be adapted to suit your needs. All ceremonies take place in the main Flint Hall which accommodates up to 140 seated guests. You can arrange the seating either for a small, intimate gathering or for larger numbers. The smaller Flint Hall offers a discreet space for your private discussions with the Registrar and can also be used for a drinks reception either before or after the ceremony.

Whilst we provide the venue, the ceremony at Folkington Manor must be booked in advance with Eastbourne Registry Office. This is a legal requirement and will ensure that a Registrar is available on your wedding date. A fee is payable to the Registry Office in addition to our venue hire.

THE GARDENS AND GROUNDS:

With 85 acres of parkland, woodlands and gardens, Folkington offers an idyllic setting for a garden party reception or a marquee in most seasons. Whether you choose a luxury themed marquee for 500 guests, an exotic Arabian tent or a simple tepee, your canvas will look stunning on our sweeping lawns against the backdrop of Folkington Manor and the South Downs.

In order to maintain our high standards we insist that you choose one of our three catering suppliers and recommended marquee suppliers. Their details can be found on our comprehensive list of trusted preferred suppliers with whom we work closely. From florists to caterers, musicians to magicians, we can recommend suppliers to suit your budget and style. For an extensive list of our recommended suppliers, please contact us.

A marquee in the grounds can accommodate any number from 100 to 1000+. Our provider will supply not only a luxury marquee styled to your choice but also everything else you may need from dance floors and lighting, to toilets and generators.

Folkington Manor can provide you with recommendations of mobile bar companies who will be able to provide you with a licensed wine bar and other drinks as requested. There is a minimum charge for this which you will need to discuss with the supplier.

If you wish to run your own pay bar you will need to apply for a TENS license from Wealden District Council and present a copy to FM prior to the event. The event organiser needs to make arrangements with the caterers or Folkington Manor re hire of glasses, bar equipment and service. If you wish to provide your own alcohol free as part of the event, you may do so and we will not charge corkage.

Please agree service and equipment charges with your caterers or Folkington Manor.

We would urge you to make an appointment to see the possibilities at Folkington and discuss your wedding plans with us.
Please contact us soon.