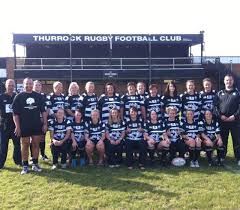 The club was formed in 1928 as Grays Rugby Football Club, by L T (Jack) Edwards. The first game was against Gravesend and was a win for the home team, 11 points to 6. By 1931, the club could field two teams. The home games were played at Orsett, using changing facilities in a barn behind the Whitmore Arms until the outbreak of war in 1939.

On being reformed after the war the club used pitches in Orsett and the Manor Field in Grays. A new era commenced when the name was changed to Thurrock Rugby Football Club to reflect the wider area from which players were drawn, and a new home found at Stanford Recreation Ground with ‘HQ’ at the United Services Club.
With the continued expansion of the club, it was necessary to obtain additional pitches. These were provided by Thurrock Urban District Council at Blackshots, and the club base moved to the R.A.F.A. Club in Southend Road, Grays.

After a number of happy years there, plans were laid for a clubhouse of our own. Financed from a bond scheme amongst members, and with help from the R.F.U., together with a considerable effort from Chairman S David and Secretary J Egan, the former clubhouse in Long Lane was opened in January 1966.
Thirteen years were spent at this clubhouse, where the number of teams increased to six senior sides and a Colts XV. The stage was set for the ‘Successful Seventies’. Thurrock first won the Essex cup in 1972 and went on to win it a record 7 times. In 1975 the club became the first Eastern Counties team to play in the first round of the John Player Cup losing in a close game to Havant. The club went on to win the Eastern Counties Cup and the Essex Cup Double three years in a row from 1974 to 76 and in 1980 reached the finals rounds of the Middlesex 7s at Twickenham where they played London Scottish. Another high point in the club’s history was when they beat London Irish 16 - 10 at home in a Pilkington Cup game in 1991.

Recently refurbished to a high standard, Comfortably holds 200 people, 120 for a sit down meal with table sizes of 10. Own bar and kitchen facilities, PA and speaker system, TV's, Projector and screen

An area , meeting table and chairs to sit down 16 people comfortably, wifi, projector, projector screen, and smart board.

We have 8 changing rooms to accommodate teams, benching and over head racking, vinyl washable flooring and heating.
2 sets of showers to allow for women and men's facilities.

We have a number of full size and junior size rugby pitches plus various training areas with floodlighting.