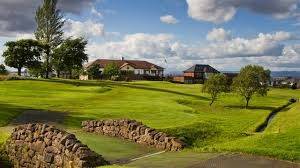 Kirkhill Golf Club was founded in 1910 from some former members of Cambuslang Colf Club. The Club house was built as a dwelling house, just in case the new venture did not work out. The founders certainly had some vision, energy and only four years after the founding of the club they arranged an exhibition golf match which was held in June 1914. The legendary golfer Harry Vardon, 6 times Open champion played with George Duncan who also won the Open in 1920.