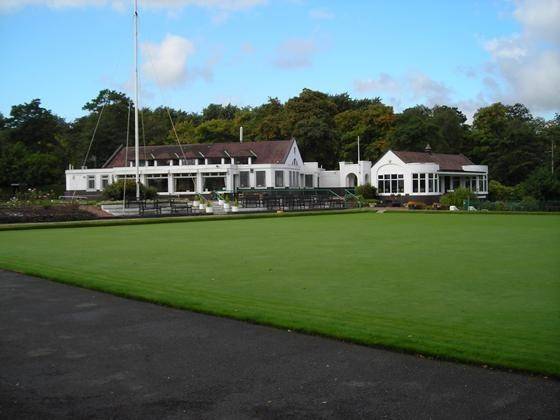 Founded in the year 1867, Queen’s Park is certainly not the oldest bowling clubs still in existence, but it is surely the best known. The “Mecca of Bowling” and “it is to bowling what the nearby Hampden Park is to football” are just two of the many compliments the club has been given.

In November 1866 a meeting of gentlemen in the south side of Glasgow was convened to discuss the setting up of a bowling club in the area, and the result was that they selected the open site on which the club stands to this day. The ground is owned by the Corporation of Glasgow (now Glasgow City Council) and an application to them resulted in the granting of a ten year lease at a yearly rental of £10, with the stipulation that the greens be laid out under the direction of their Parks Superintendent, a Mr. McLellan. To provide the finance for the project, £1 shares were put on offer, raising the princely sum of £604. A condition of the lease was that should it not be renewed after the ten years the club had the right to remove all plants etc and all buildings if it so wished. Needless to say, the buildings are still standing and the greenery is flourishing! Queen’s Park Bowling Club was born!

The club then set about building two greens, East and West, and the original clubhouse. Costs for the turf, sourced from the Kilwinning area, were £4.10s per 1,000sq.ft., which together with carriage costs, came to the sum of £370. It then cost £309 to lay the turf, and a further £235 to build the original bowl house. Adding on costs of paths, flower beds etc. the entire project came to £1,200, which was met by the issue of shares to that amount, all of which has long since been repaid.

A club constitution was set up, John Robertson being the first President, and the greens opened for play on Thursday 13th June 1867 with great razzmatazz.

In 1889 the club decided to add lawn tennis courts, and additional ground was leased from the Corporation, sufficient for six courts, which, along with a large conservatory, was then built. At this time the club changed its name to Queen’s Park Bowling and Tennis Club, a name that it carries to this day. In 1894 it was decided, presumably due to lack of play on the courts, to convert three of the tennis courts into another bowling green and, having procured turf from the Isle of Bute, the South green was born. In size it was halfway between the difference of the two other greens, with the West, although slightly reconstructed in the 1880’s, still being the smallest of the three.

The club has had its difficult times over the years as it strived to change with the times and maintain its high standards. For example, when the horse drawn trams on the adjoining road were converted to electricity, it involved losing part of the small green to accommodate the widening of the road, and further damage was caused by the building of a main sewer. However, over the years this was all put right, and throughout it all the club was blessed with an understanding and accommodating landlord, who maintained the lease with various renewals and renegotiations, and this is still the case to this day.

By 1926, the dream of building a new clubhouse became a reality, and on Opening Day of 1929 the present clubhouse was opened by the then Lord Provost, Sir David Mason. The cost at that time was £5,000. In 1938 the conservatory succumbed to old age, and was demolished, making room for the annexe which today houses two three quarter size snooker tables. It also provides good viewing areas for both East and West greens. At the time the cost of the annexe “exceeded £2,000”:- the club has only recently renewed all its windows at a cost in excess of £9,000.

The war years obviously took their toll on the membership, and the last half century or so has had its ups and downs, as have most organisations. However, certain things have not changed, in that we are still the proud possessors of three of the finest greens in the country, although sadly our tennis section is no more. The gradual decline ended in 1998 when the reduced numbers necessitated no further expense be allocated to the courts, although to date the club has not changed its name back to the original. For many years the club was to house the Scottish National Championship, assisted by other neighbouring clubs. Without any prior warning, however, in 1989 the SBA succumbed to financial inducements and moved them to their present home in Ayr. Thankfully we have maintained some very long-standing friendly club games, and are proud of our association with clubs like Broughty, whom we’ve played for over fifty years, Irvine –Winton, Old Kilmarnock, Wellcroft and Titwood, to name but a few.

For the real historian, much of the above information has been gleaned from a book published a long time ago called “Touchers” and written by a former Queen’s Park member, D.L. Mackintosh. It is unlikely to still be in print, but may be available at good libraries

Since writing the above information it has been necessary to close the west green for economic reasons.
We are, however, hosting an increasing number of outside functions in our function suite, including all kinds of parties, weddings etc. and anyone interested is invited to contact the club secretary for full details