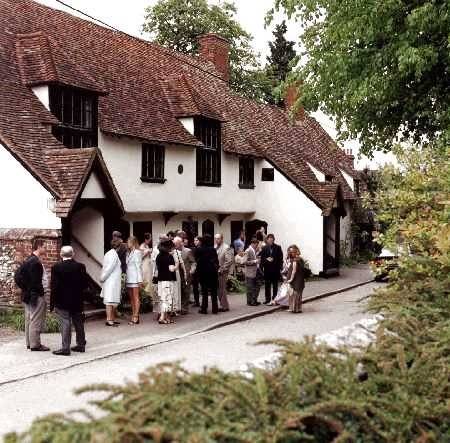 The Town House is described in Norden's late 16th century Survey of Barley as 'The Court House of the Manor of Mincinbury, formally in the occupation of the vill or inhabitants of Barley, situated opposite the church there, which the lord now uses to hold the manor courts of Mincinbury'. This was one of three manors at the time, but the 'lord' was not to have possession of the Town House for long. Evidently the people of Barley had protested against the attempt of the new lord of the manor to usurp their rights.

At a court held at Buntingford in 1609 the jury decided that the Town House was to be used 'for the poor inhabitants, for their marriages, to collect and cause by meeting, the gifts of the charitable people to be obtained towards the help and relief of the poor inhabitants within the said town ..... and also for a school house, and so it has been for time out of mind until the late Sir John Spencer Kt, Alderman of London, has made claim to the said house'. Sir John and his heirs were ordered not to 'vex the parishioners in their holding'.

The Buntingford charities inquisition of 1638 gave the Town House date as 1530 and stated 'the saide house hath been tyme out of mynde used and ymploied for the keeping of maides marriages therein and for the hangeing up of the Town Arms therein, and for the chief inhabitants there to mete and consult of the affairs and common busynesses of the Town of Barley'. The Rector stated that 'keeping of maides marriages' meant homes for spinsters and not wedding celebrations.

Cutting the Cake in the UndercroftIt is thought that the Town House replaced a former building which had stood there for about 400 years. This may have been provided by Alfwen, wife of Ethelstan, who had been nurse to King Edgar, as the village or guild hall. It was rebuilt with funds thought to have been made available by William Warham, Rector of Barley at the turn of the century and later Bishop of London, Archbishop of Canterbury and Lord High Chancellor, who founded a school in it to teach Latin to poor boys, and so it had educational connections from an early date. Tradition says that he was very attached to Barley and this is probably true as he is believed to have had a good deal to do with the early work of the Town House.

In 1726 Daniel DeFoe wrote a book on his Tours of Britain. In his description of the Town House he wrote: upstairs there is a large room for entertainment feasting and merriment; a small room to the side for the preparation of food with a spit, large cauldron and dripping pan; a room at the end of the main room which contained a bride bed and good linen, for the couple to spend their first night to consummate their wedding!

The building continued to be used as a school, though learning seems to have been at a low ebb in 1779 when the schoolmaster complained that as only two free scholars came to the school he had a bare two shillings a week 'which is, in a manner of speaking, a starving situation'.

Though used as a school during the 17th century, hardship caused by the Civil War and the Napoleonic Wars later meant that any extra mouths to feed aggravated the already heavy burden of the Poor Rate. The Town House ceased to be used as a school and became a workhouse. Any 'foreigners' who were likely to be a charge on the parish were sent back to their native villages.

Wars indeed caused a lot of family distress and this was aggravated in Barley by the pulling down of the cottages in Little Chishill to avoid the Poor Rate, but the census of 1841 shows most of the people living in the Town House at that time to have been born in Barley, so even if the cottages were destroyed it is doubtful if the tenants were re-housed in Barley.

However, at one time men, women and children were herded together in the big room, with a madman, on one occasion, chained to the wall at one end. There were 28 paupers accommodated there at one time and in 1853 36 people were living in the Town House as a workhouse when the Rev R A Gordon was appointed Rector and he had them accommodated elsewhere, possibly in Royston, where Heath Lodge had been built in 1835 to cater for the surrounding villages.

School matters were little better in the middle of the 19th century, over half the people getting married being unable to sign their name. Considerable alterations to the Town House were made so that it could be used as a school again and it had 140 scholars when it reopened. An interesting relic of the building's use as a school was the second lower stair rail on the staircase nearer the church.

Towards the end of the 19th century difficulties arose over the continued use of the Town House as a school. On one occasion ink froze in the inkwells, in spite of two large fires. The authorities wanted to pull down the Town House and build a new school on the site. Luckily this was rejected and the present school came in to use in a building next door to the Town House on 22nd April 1895. However, the Town House was pressed into educational services as recently as the 1940s when evacuees from London swelled the numbers.

"The Scholars attending Barley Schools left their old quarters in the 'Town' House and walked in procession , headed by the Royal Standard and Union Jack flags to the present School. The Rector - the Rev J Frome Wilkinson - addressed them on the importance of learning as a means of training them for a useful sphere in life, the observation of punctuality, and regular attendance, attention to school duties and obedience to their teachers. The children then settled down to work."

The rooms underneath were last occupied about 1870 when the occupants were moved out as they were apt to set themselves or the building on fire. The small room was added late in the 17th century and was used by the boys and girls for their cloaks and hoops when the Town House was used as a school. It was enlarged in 1863 by means of a fund raised among farmers and landowners with a substantial contribution from the Rev Gordon.

A second staircase was put at the back of the Town House and dormer windows added when the small room was enlarged, but this staircase was replaced by the one at the end nearest the present school in 1910. A drawing of about 1850 shows a staircase in the middle of the south front facing the road. This must have been removed when the dormer windows were put in.

A further use was found for the building when a manual fire engine was housed on the ground floor in 1913.

A sketch of the Town House dated about 1835 shows a central chimney stack in addition to those at each end. This was later removed, but it is from the time when the ground floor was divided in to living quarters, each with its own fireplace. The twin fireplace in the smaller downstairs room and the dividing wall are the remaining evidence of this use of the building.

The church connection with the building and its history has continued until very recently when the Rector, Canon Locket, an architect prior to entering the Church, was responsible for the last refurbishment of the ground floor or Undercroft in 1980-81. The work of a dedicated band of village people augmented that of the builders in a transformation of a derelict ground floor into the comfortable rooms that are to be seen today.