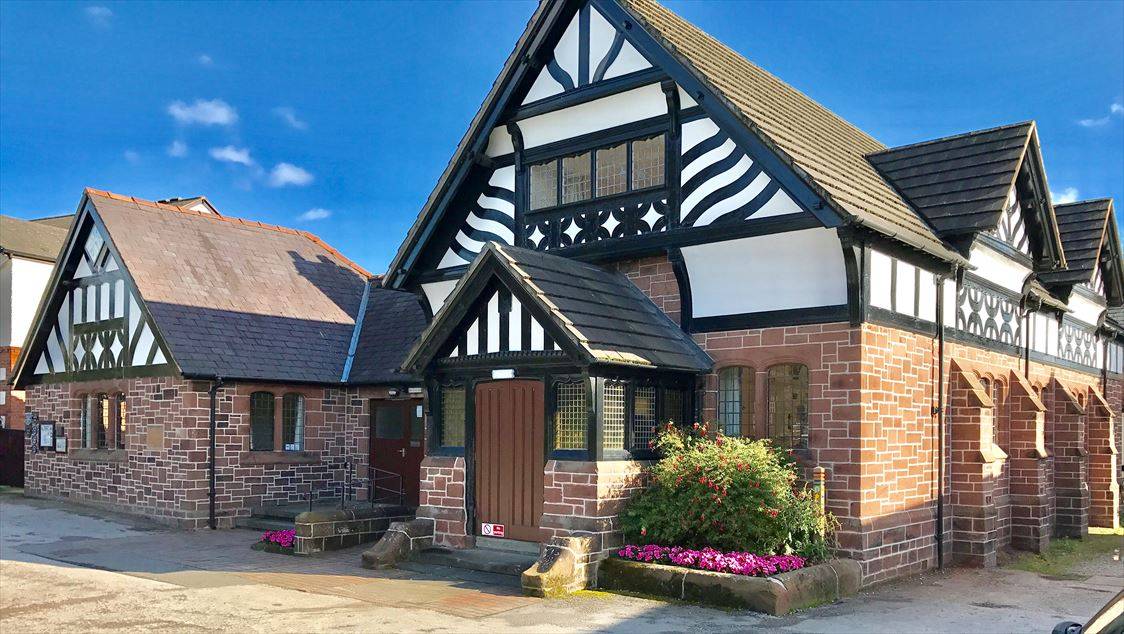 Limited bookings within the strict Government rules are being accepted. Please review under documents latest guidance for hirers.

Available for hire for regular bookings or one off events such as meetings, fund raising events, weddings and children's parties, etc. All rates are very competitive with special discounts for volume use and organisations whose work involves the young people of the community

The Hall has a large central hall, good sized committee room, large modern kitchen and toilets. It is suitable for up to 125 people. During summer 2017 a major internal refurbishment was undertaken.

Ideal for committee meetings or use as a small lecture room

A rectangular space with an high arched ceiling.
There is access to the Kitchen via a hatch with an electric shutter. Available in situ are a pull-down projection screen and a piano, and the Hall has its own built-in sound system.
The Hall may be used for formal seating in theatre style. Alternatively it accommodates dining, dancing or a combination of both.
Chairs and collapsible tables are stored in rooms adjacent to the Main Hall.

The Hall will open again at the start of September 2020 for all users. You will need to submit a Risk Assessment form to the Trustees before hiring the Hall and agree to the Special Hiring conditions shown under the documents section of the website.

Other recent detailed guidance for the Trustees of the Hall and hirers is included under the Documents section of the website under headings 'Coronavirus updates'.

If you are a regular hirer or a potential casual hirer of the Hall, please take some time to read these documents as they set out the requirements that will be in force to hire the Hall during the Coronavirus crisis period.

Interested in Gardening? Do you have a few hours a month to spare?

Do you have a few hours a month spare and would like to volunteer helping keep the community Village Hall looking smart and tidy?

We need help in keeping the garden and building surrounds free of weeds and tidy, bushes trimmed and footpaths swept.

if you can spare some time please contact our Secretary Doreen Francey on:

Regular users of this venue:

All welcome (no auditions required).

We are open term time 9 am to 3 pm Monday to Friday.

We take children aged 2 to 5 years with funded places available for 2, 3 and 4 year olds.

The Memorial Hall is a registered charity, looked after by a group of volunteers who act as Trustees. The Trustees are responsible for the long term strategic direction of the hall, as well as its day-to-day running and maintenance – ensuring that it remains available for the local community to use and enjoy.

We would love to hear from anybody who might be able to volunteer their time to support us. There are lots of ways to help, without necessarily acting as a Trustee. For instance, you may have expertise in a certain area that might benefit the hall, from graphic design and web design skills to maintenance and building knowledge. Please contact Hon Treasurer Keith Greenfield if you would like to help: 0151 364 6942 or 07947 836810.

Willaston Memorial Hall is owned by the village and managed by a committee of Trustees, nine of whom are nominated by the organisations who use the Hall and four are elected at the Annual General Meeting; the Trust Deed allows for the co-option of three other trustees. The local council does not financially support it in any way.

The late Duncan Graham of the Lydiate erected “The Willaston Institute” as a gift to the village for the purpose of a Club, Lecture and Meeting Hall, Reading Room, Library or such other purposes as may be found desirable for the benefit of the inhabitants of the parish and neighbourhood of Willaston.

290 square yards of land to the side of the Institute were purchased for the sum of £60 on part of which was erected The Willaston War Memorial Hut by the then Willaston Village Society.

Following consultation with village organisations it was agreed that The War Memorial Hut (which was then beyond repair) should be pulled down and replaced by a new permanent building joined to the Institute.

Following extensive fund-raising, substantial refurbishment of the Hall was undertaken and an extension housing new toilets was built because no major improvements had been made since the erection of the new building and the Hall did not meet current regulations for its use.

Following the receipt of some external grants, further major refurbishment of the Hall was carried out.

Management of the Hall

The Memorial Hall has two sets of Trustees. Firstly, the Custodian Trustee is the Official Custodian for Charities. The Hall is vested in the Custodian Trustee whose responsibility is simply to hold the legal title of the Charity’s property and to act on the lawful directions of the Committee in any transactions affecting this title.

Secondly, the Managing Trustees are members of the Management Committee, and are responsible for the day to day management of the Memorial Hall, in accordance with its governing instrument (i.e. the Trust Deed). The Committee consists of up to sixteen members in total, nine of whom are nominated by organisations of the village that regularly use the hall and four are elected at the Annual General Meeting in March; a further three Trustees may be co-opted. (Volunteers who help with the running of the Hall are also invited to attend the Management Committee meetings.) The Committee usually meets on the second Tuesday of every other month. The Trustees elect a number of officers from within the members.

There are approximately 8,900 village halls in England, the majority of which are managed in this way. Few problems are experienced as long as committee members manage the building with all reasonable due care and attention, in the same way that they would manage their own affairs.

Committee Members are expected to attend the meetings in order to have a full knowledge of how the Committee is run, its financial situation and the decisions made and why. They should bring their thoughts and ideas on how this vital village asset can continue to be run and managed successfully. Although they may have been nominated by a village organisation to become a Committee Member, they must act in the best interests of the Memorial Hall. They are entitled to put their organisation’s views but, if there is a conflict, they must make decisions in the best interests of the Hall. If a Trustee is unable to attend a meeting, they may nominate a substitute to attend in their place, but that substitute cannot vote on any matter.

2020 BOOKING RATES FOR HIRE OF HALL AND COMMITTEE ROOMS

£20.00 per hour for both the Hall and Committee Room together

Note: Time for preparation/setting up and clearing the room is to be included in the required hours as well as the hours of actual use.

Volume based discount based on the annual number of hours the Hall and Committee Room are booked for are as follows:

£400 (minimum hire 4 hours) plus standard hourly booking rate of £17 per hour for every additional hour up to a maximum charge of £650.