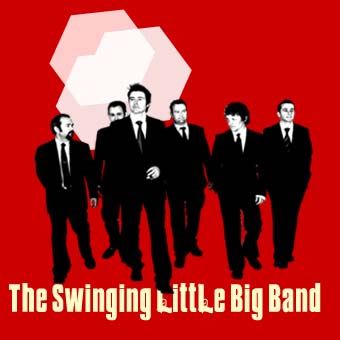 Venues and the public

A charismatic & original swing band playing their own versions of modern rock & pop songs as you've never heard them before alongside classic swing numbers.

The Swinging Little Big Band's 'Rat Pack Re-loaded' show features classic swing numbers followed by modern rock and pop songs re-arranged as swing, jump jive & salsa. Songs by artists such as the Arctic Monkeys, Oasis, The Strokes, Coldplay, Pulp, Happy Mondays, as you've never heard them before!
The band has entertained at many of the country's finest venues, including The Dorchester, The Mandarin Oriental, The Lansdowne Club and Gray's Inn; at corporate receptions, weddings, awards ceremonies and parties both public and private. Whatever your event, The Swinging Little Big Band is sure to appeal to all your guests.